Founded in 1880, New England Nurseries is one of the oldest nurseries in the state and was. We were part of Geneva Nursery, which was established in Geneva, New York in 1846. The combined operation, consisting of 800 acres, served the Northeast. The nursery had its own stop on the rail line, designated as Shady Hill Station, and a sales office in Boston. Products were shipped from all over the country, with rail service to the office door available from Arlington every 30 minutes and from Boston’s North Station at 8:21 am and 1:51 pm daily. Known as Shady Hill Nursery until the early 1900’s, the name was changed to New England Nurseries in 1912 because a family member felt “Shady Hill” had a dishonest sound. The trademark read “Bedford Grown Means Quality.” 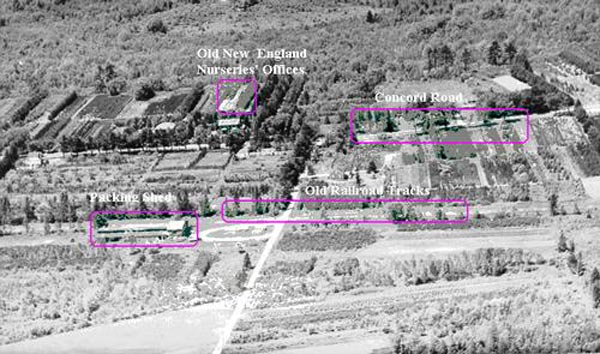 We Specialized in Landscape Design

The nursery specialized in landscape design and planting of large and medium-sized “estates” and offered complimentary advice based on a pencil sketch to even the smallest homeowner. John Kierkegaard, newly arrived from his job as director of the Botanical Gardens in Copenhagen, Denmark, was associated with the Bedford operation from its inception and became owner soon thereafter.

From old catalogs, we learned that the nursery could ship 100 lbs by rail to Kentucky for 63¢, to Michigan for 73¢ or to Philadelphia for 29¢. Fruit trees cost 35¢ each or $3.00 for ten. Perennials were 15¢ each or $1.50 for ten, and the list was extensive. A 4 foot Japanese Tree Lilac was 50¢. Here we learn that the first tree lilacs grown commercially were propagated in nurseries in 1885 and soon were distributed to all parts of the world. A 6-foot willow was 30¢ and fourteen varieties of oaks were offered.

And Who We Are Now

Now over a hundred years later, the fieldstone walls of the big barn on the rail line still stand where bareroot trees and shrubs were stored and prepared for shipping. The barn is now used for nursery storage and potting. Today we are a modern Garden Center and offer the services of an established design and construct Landscape Department looking ahead to the future with up-to-date ideas and products. We are committed to serving our customers with Quality, Advice, and Value second to none. Old growing fields are being reclaimed and will be maintained in the agricultural tradition to grow the quality and variety of products that our customers expect. We welcome you, our customer, as a part of our continued history.

Back to the top